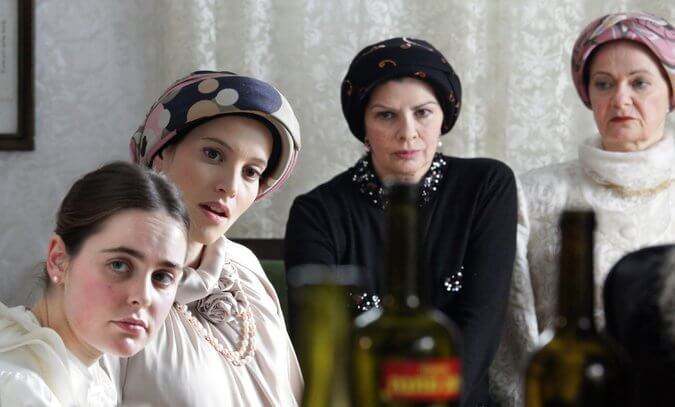 You’ve come to the right place. Here we give you the Top Jewish movies out there.

Cuddle up with blankets and turn the lights out, because these movies are so powerful they’ll make you stop and really think deeply about life.

From heart-wrenching Holocaust movies to sweet romance and then just regular day life, you get to have a glimpse of exactly how all types of Jewish people live.

STORYLINE: Portrayed in an ultra-orthodox Hassidic community, Fill The Void gives us a good picture of the everyday life that they live. A fantastic movie about a young lady offered to marry her late sister’s widow.

Fill the Void is full of excitement and drama, as well as heart-break after the loss of the much loved sister. Watch as Shira decides if she should marry her brother-in-law and take responsibility of her sister’s baby too.

To watch it: Rent or buy Fill The Void on Amazon.

2. Fiddler on the Roof

STORYLINE: All about tradition; tradition and how it fades. Oh, this heart-breaking film is a favorite among many. Tevye, the main actor is a funny, love-able character that you feel you know and never want to stop laughing with. And the rest of the lot? They’re just as good.

About a family in old-time Russia that’s marrying off their daughters through harsh anti-semitism. You see how tradition fades as the daughters are becoming less and less loyal to Judaism and to their fathers word.

To watch it: Rent or buy Fiddler on the Roof on Amazon.

STORYLINE: Ushpizin is about an orthodox couple that are married for five years and don’t have children. After praying for a miracle and buying an expensive etrog with all their savings, they are challenged with Ushpizin: guests.

This movie gives you a real understanding of the Israeli culture and mind-set. It’ll make you laugh and shake your head watching this drama that is so well liked.

To watch it: Buy Ushpizin on Amazon.

STORYLINE: A gripping biography of Oscar Schindler during World War II. Starting out as a greedy business man, after he sees what the Nazis are up to, the legendary Schindler, turns his factory into a refugee for Jews.

Schindler’s List is one of the most well done and famous Holocaust movies.

To watch it: Buy or rent Schindler’s List on Amazon.

STORYLINE: After her father passes away, a bright Jewish young woman, Yentl, goes undercover as a boy so that she can learn intensely in a Jewish boys school.

Yentl has won Golden Globe awards and Oscars, and is a classic that’s always fun to re-watch.

To watch it: Buy or rent Yentl on Amazon.

STORYLINE: After his wife dies, Menashe, an ultra-orthodox Hassid, is told by his Rabbi that he cannot raise his son on his own. The movie is about the struggle of wanting to have his boy live with him, not wanting to get re-married, and trying to defend his dignity.

Menashe gives us a peak into the every day life of a Hassid living in New York, and is a fascinating, well- made movie.

To watch it: Buy or rent Menashe on Amazon.

STORYLINE: The Frisco Kid is a hilarious movie about the adventures of a Rabbi on his way to San Francisco to run a synagogue. A funny and feel-good film, this is one you’ll watch over and over and quote all the time.

Orthodoxy is portrayed in a beautiful light, as well as true friendship and warmth.

To watch it: Buy or rent The Frisco Kid on Amazon.

STORYLINE: Entebbe is the true story of hostages in a terrroist hijacking, and IDF whisks in to rescue the hostages, making one of the most impressive military operations of all time.

This movie leaves you with a bitter-sweet tang, but a very proud feel.

To watch it: Buy Raid on Entebbe on Amazon.

9. The Prince of Egypt

STORYLINE: Based on the story of Moses from the Bible, this movie does a fantastic job at bringing that to life. This is a true classic and one of the best animated Bible stories.

The movie has won awards and is a famous DreamWorks piece.

To watch it: Buy or rent The Prince of Egypt on Amazon.

STORYLINE: Left Luggage is a movie about a daughter of Holocaust survivors whose raised not religious and uncaring about her fathers story. Looking for a job desperately, she takes the position of a nanny for a Hassidic family and enters their entirely different world.

To watch it: Buy Left Luggage on Amazon.