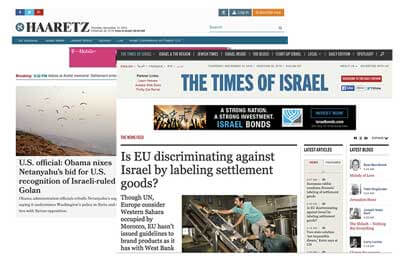 Once upon a time , not too long ago in fact, you would see people aggressively shoving and pushing at news stalls to be one of the lucky men worthy of going home with a newspaper, only to be greeted by no more newspapers left. Defeated and unsuccessful they’d sadly walk home having to find out the latest happenings, events, and international news by someone else instead of reading it for themselves.

However, then came the internet and with a slow turnaround that all ended. Yes, you still can buy a newspaper or get one delivered to your door, but today, you don’t need to anymore. It is all on the internet.

Oh, how we love the internet.

We’ve collected the 10 TOP Jewish Websites that are literally first with Worldwide news. Minutes after events happen these websites have already news-flashed, it is amazing to see. 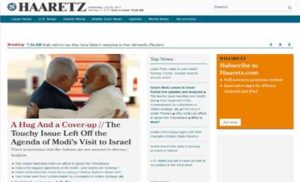 Published in both Hebrew and English, Haaretz brings us the breaking news from throughout all of Israel and the Middle East.

Haaretz was established in 1919, and is still in print today. It is Israels longest running newspaper. It prints in Israel as well as North America weekly.

Haaretz is left-winged, and therefore it takes a liberal stance on current political issues.

JPost, or The Jerusalem Post as the hard copy newspaper is called, is among the top most popular newspapers in Israel.

The newspaper provides coverage of the news and portrays views widely from one side to another ofthe political spectrum. The Jerusalem Post mainly discusses topics on Israel, the Jewish world, and the Middle East.

In the late 80’s, the Jerusalem Post took a major change to becoming right-winged after being very leftist.

Ynet newspaper comes out daily and offers its readers the latest, up to the minute news.

Ynetnews covers not only Israel and Middle Eastern news but also world news and culture. 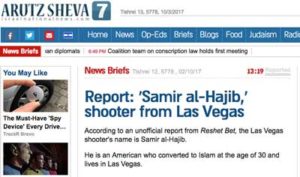 Arutz Sheva, known in English as Israelnationalnews, and also as B’sheva, is Israel’s third most-read newspaper.

Isreal National News has a 24 hour news coverage that keeps you constantly up to date.

Arutz Sheva also launched itself as a radio station back in 1988. It calls itself, “the largest independent news-talk network in the Middle East.”

It’s obvious that Israel National News is right-winged and identifies with Religious Zionism.

Founded in 2012, Times of Israel, the online newspaper is based in Jerusalem. 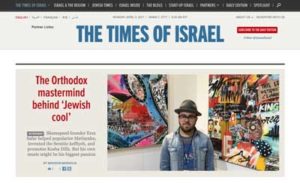 The Times of Israel has a refreshingly different approach then its rival websites; it has no partisan political affiliation. Time and time again we see as they portray the news in a fair-minded and open way. As well as offering a wide range of analysis and opinion pieces that let the reader come to their own conclusions.

The Times of Israel is a relatively new website, launched in 2012, and is building success at a rapid pace.

The Jewish Press, based in Brooklyn, New York, is the largest Jewish newspaper distributed in the U.S. In 2011 Jewishpress launched their website.

Jewish Press is for the Modern Orthodox community and they proudly express themselves through a Torah perspective.

The Algemeiner is a weekly newspaper sharing American, international, Jewish and Israel news. Although the newspaper does well; online is actually the majority of the The Algemeiner’s readership. 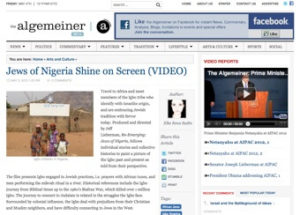 As described by Joseph Lieberman, the Algemeiner is, “independent truth telling advocates for the Jewish people and Israel.”

Elie Wiesel was in fact chair of the Algemeiner Advisory Board. 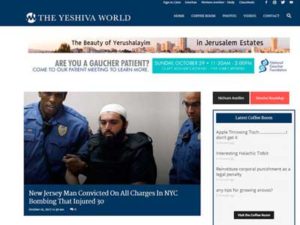 The Yeshiva World is an online news publication catered towards Orthodox Jews and it covers a broad variety of departments that are discussed from current community weddings to visiting community mourners.

The Yeshiva World also offers what they call, ‘the coffee room’, a forum that they allow the readers to ask questions or voice their opinion. 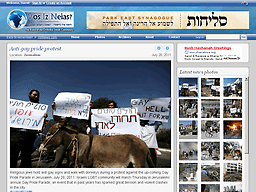 Voz Iz Neias in Yiddish, or in English, “What’s news?”, is a Jewish Religious blog. Many New York and Israeli Orthodox and Hassidic Jews use Voz Iz Neis as their source for daily news.

Voz Iz Neias constantly updates and even has a few Hassidic writers, (most of whom are anonymous). 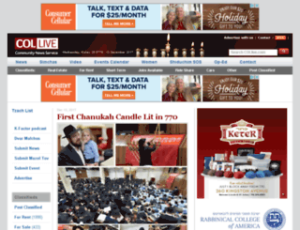 Chabad On Line Live, or COLlive, is a thriving online news blog that is the latest on Chabad-Lubavitch Worldwide news.

COLlive is based in Crown Heights, the Chabad headquarters, but does however, discuss and share news from all Chabad communities in different countries. It also shares news on Israel as well as any relevant major world news.

2 thoughts on “The Top Most Read Jewish News Websites”